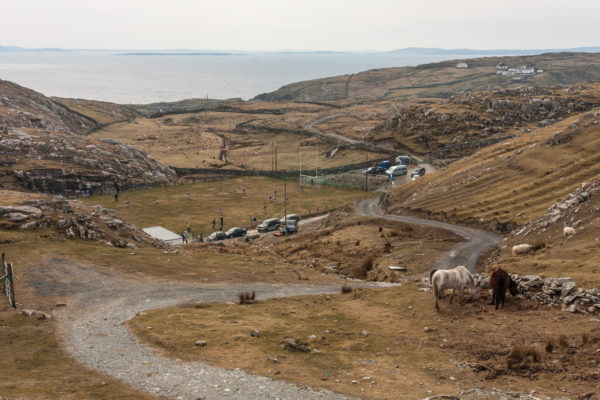 Gaelic Fields is a photographic body of work which is the result of a seven year project to document the position of the Ireland’s Gaelic games within the communities of Ireland and its relationship within the environment.
It is a visual exploration that shows a terrain that is familiar and unique, as the national sports leave their physical trace embedded in the landscape. It imprints the rituals, aspects and action of a Gaelic club game on to the locality. Carroll’s inclusive democratic approach sees adult male and female, junior and senior, league and championship games captured. Each county on the island is included as well as every element of Irish weather. The resulting work bridges genres as it is both a portrait of communities and the social nature of Gaelic sports and fundamentally reads as landscape.

Paul Carroll is a Cork City based photographer. The main focus of his work is the intersection between Irish communities, their surroundings and environment. This approach led him to question the unique ways in which these communities harness the land throughout the 32 counties on the island.
Between 2009 and 2016 Carroll focused exclusively on capturing grass roots GAA games, the communities where they are played and their surroundings. This led to his debut book Gaelic Fields. The result is a social documentary which captures intrinsically unique values about Ireland’s national games, environment, identity and play.
His work has been featured on national television and in publications locally, nationally and internationally. Carroll studied darkroom photography in Cork’s College of Art and Design (CCAD).